While I've no problem whipping up a pizza dough or some quick biscuits from scratch, and I'm also schooled in the art of cookie and cupcake making, for the most part....bread was just something I never made. Not as a carnivore a decade ago, not as a vegetarian, but as a new(er) vegan, I find it harder and harder to find bread I'm willing to eat that doesn't contain eggs, milk or whey, honey, or high fructose corn syrup. 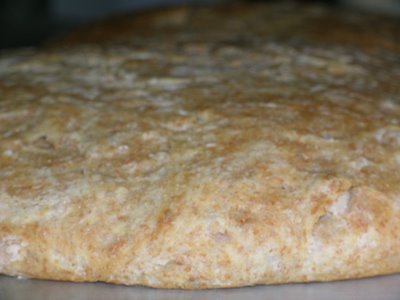 I don't have a bread machine and always thought having one would just mean trouble (I love me some hot, fresh bread), but I was beginning to ponder my options in the hopes of having good bread now and then that I felt good about eating.

Then I stumbled upon what seemed to be an easy and yummy bread recipe over on Vegweb, and it did not disappoint! As promised, it has that yeast-y flavor that I remember from childhood cafeteria days, is so easy to make, and loaded with possibilities. Tonight I stuck strictly to the recipe (ok, I deviated and threw in 1c. whole wheat flour and 2c. unbleached flour each time), and didn't add any herbs or ingredients that would shake up the recipe too much. I wanted to try it out as it was (mostly) and see what came up.

Well, it rose quite a bit on the second proofing, but didn't become nearly as huge in the oven as I'd hoped, kind of died back down, as you can see. I'm sure this is due to the flours I used, and I'm fine with that because it was almost foccacia like in density and the flavor is simple but sooooo tasty! I can't wait to bake it with cloves of roasted garlic and herbs in the future or turn it into cinnamon buns, sandwhich rolls, breadstix, the possibilities are endless! (see why I knew making my own bread would be trouble? ;)

I highly recommend checking it out, along with all the recommendations over on Vegweb. I, the bread baking novice, am giddy at the thought of trying some of their suggestions. 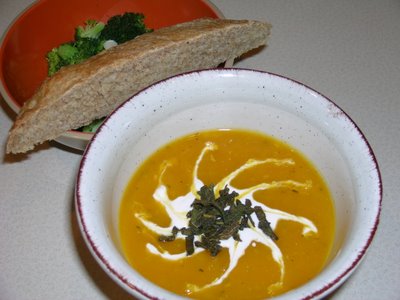 No, we didn't just have bread for dinner (tho, I must admit I was tempted!), but served it with some fresh steamed garlic broccoli and a Vegan version of Moosewood's Butternut Squash Soup that I found at Recipezaar. I like the soup a lot but made it with the apple juice suggestion (we had cider, actually) and found it to be wonderful, though a bit sweet to eat again any time soon. So I froze the rest for a later date. I'd love to find a recipe that is creamier in texture and more on the savory side of things. But it sure is pretty! 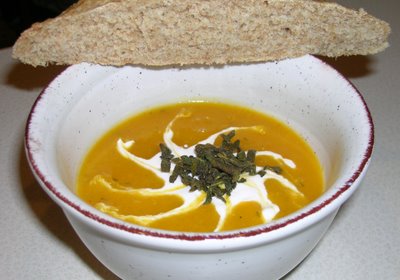 Congratulations!! You finally made bread, and it sure looks great! :P YUM! I'm eating veggie soup right now and now I realize I am missing something. I want that breadstick in your photo!! Lol!

Yes! That butternut squash soup os so pretty! I like the swirls in it. I know what you mean though that they can be too sweet sometimes. It looks great though!!

Have a great week!!!

Great job on the bread! I use my bread maker but only to knead and rise. I always bake in the oven.

And what a lovely bowl of soup. I'm with you on the squash. I never did like those casseroles with sugar and marshmallows.

Thanks for visiting me, Vegan!
Must be hard converting from carnivore to vegan!! I am the opposite, raised in a pure vegetarian Shaiva family, now a non-veg eater!Still 5 out 7 days/week , I cook veggies but kids want NV on weekends!:)
Your bread looks good for a first try!! Soup looks great!!I have some butternut squash dishes like waffles and a stir-fry if you like!

that's a beautiful bowl of soup -- i love the star design -- almost too pretty to eat! ooh, and i think there's nothing better than fresh baked bread --- nope, no bread machine here, either -- i'm afraid i'd eat waaay too much if it were convenient enough...

Candi- thanks! This had better not become a regular thing. I think I'll have to commit to only indulging once a month. We should have a bread swap or something. :)

The squash was really good, but more like a glorified warm applesauce. Next time I'll go for savory for sure.

harmonia- I know, when I first became vegan I was appalled that it's in so many things!!! You too!!

atxvegan- yeah, I'm trying to not want every kitchen appliance I see. If I can get away with not getting a bread maker I'd like to. Hoping our new house has a better oven. Mmmm, savory's good.

foodie's hope- It was a pleasure to visit! like I said, I really like the way you present everything. becoming a veggie from carnivore was the easiest thing for me all those years ago. It was like I just woke up one day and knew that it's how I wanted to eat, how I wanted to contribute. I thought that becoming a vegan would be much harder, but once I armed myself with knowledge? piece of vegan cake! :) It's not very convenient if I try to live as I once did, but I think that's part of what led me here. I don't think my eating should be so convenient. The more thought and time I put into it, the more I get out of it. It's what works best for me. I don't have any kids (yet) but if we do, I know it will be interesting, raising a child who has all the info, but allowing them to make their own choices and not think I know what is right for them. I look forward to it.
I would love a few of your butternut recipes, your food all looks amazing! :)

i love how you put the swirls in the soup...that's attention to detail! bread..mmm...i bet your house smelled amazing.

The soup looks delicious. I've had good luck with that bread recipe from VegWeb as well. I love the way homemade bread smells when it is baking!