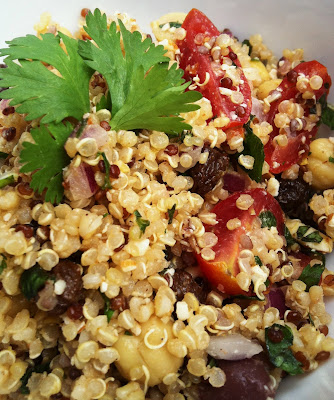 It's hot. Muggy, rainy, sweltering hot. I knew when I was grocery shopping yesterday that I'd want to make a quinoa salad. They can be packed with nutritious things and enjoyed cold or room temp for days. I have had zero luck with mangoes being ripe of late so the beloved black bean mango quinoa salad was out. Besides, it was time to take off the training wheels where quinoa salad recipes go and come up with one of my own!
I had the pleasure of having friends over for dinner, one of which would be bringing a slow roasted cauliflower and white bean curry soup. Wanting something to compliment the curry my brain went straight to Moroccan. Why? I have no idea, but the results were fantastic!
I am terrible at measuring when creating something new so as to share a formal recipe, but here's basically what I did (I knew I should have snapped pics for each addition, had a feeling this would be worth sharing!):
Cook one cup of dry quinoa in vegetable broth. I always keep a mix of red and white quinoa in my pantry in the same container as I love the way it comes out visually and the red keeps its form a bit better than the white. I used Better Than Bullion Vegetable base in water for my broth.
While that cooked I took out a small bowl and zested one large lemon, and squeezed out all the juice into the bowl. I smashed and finely chopped two cloves of garlic and added that to the dressing. Next I added a heavy pinch or two of course sea salt, maybe a half of a tsp of ground cumin, about a scant half tsp of Hungarian paprika (that and smoked is all I ever have on hand), two dashes of cinnamon, and a tsp or so of agave nectar. Stirred that up and whisked in 1-2 T of olive oil (I am not a fan of extra virgin except for bread dipping so mine is the extra mild variety), and set that aside.
Once the quinoa is cooked, remove from heat and set in refrigerator while chopping other ingredients. How much of each? Well, that's entirely up to you. I tend to chop, add, toss and make sure it looks like there will be a bit of each ingredient in every bite. That said, I added:
fresh cilantro
fresh parsley
fresh mint
(I'd say, finely chopped, there was a total of 1/8-14 c. of herbs added)
red onion, chopped fine
pitted and chopped kalamata olives
organic raisins
organic grape tomatoes, quartered
chickpeas, rinsed, drained and outer skin removed (for me, eating leftover salad, I enjoy the chickpeas best if their texture is not full of that skin)
chopped almonds (raw and unsalted)
I added the dressing, tossed, and let it sit out, covered until we were ready to dine accompanied by bread, more olives, roasted garlic hummus, dried tomatoes cured in olive oil, and that amazing cauliflower and white bean soup. Best meal ever after grocery shopping and running errands in torrential downpours mixed with moments of pure muggy.
The texture of the salad was full of slight crunch and soft bites and the flavors hit all the things I love about Moroccan flavored dishes. It paired perfectly with the curry in the soup and is even better the next day (oh yeah, best lunch right now while I type!). I suggest eating it at room temerature when the flavors can really shine.
Posted by Don't Get Mad, Get Vegan! at 11:29 AM No comments: 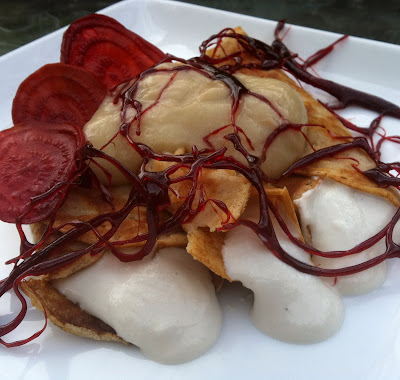 When I knew Isa would be holding another Vegan Chopped I knew it would be fun to do again, especially without a time constraint. This was exceedingly important as a couple of my original ideas failed and I had to keep tinkering to get something that would still turn out worthy of capturing in a picture (or at least interesting in a picture. Does that beet syrup candy up there remind anyone else of the Sentinels in the Matrix movies?) AND still be really yummy to eat.
Mystery Ingredients: Crisped Rice Cereal, Fresh Bunch Beets, Fresh Mango, and Dried Unsweetened Coconut.
Here's my very 'wake up in the morning, totally not stressed that I haven't even bought the ingredients yet, or that I should be cleaning and packing for a trip, or that I've never attempted more than half of the ideas I thought would be just perfect for this challenge' layout. 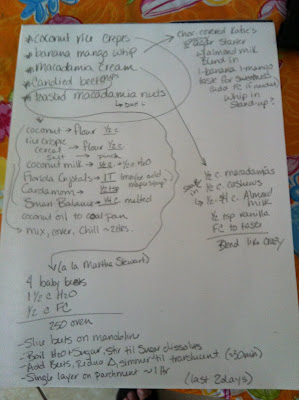 I would soon trek to the health food store and grab the very last bunch of beets, get to the grocery store and find that none of the bananas or the mangoes were near ripe enough to use today and get ideal results. yay! Unphased (at this point, anyway) I first worked on the crepes as the recipe I was using as a guide for GF coconut flour crepes (that is nowhere in my history now, sorry!) stressed chilling the batter for a couple hours. First I ground the already fine dry unsweetened coconut and the rice cereal each into as fine a powder as I could in the bullet. 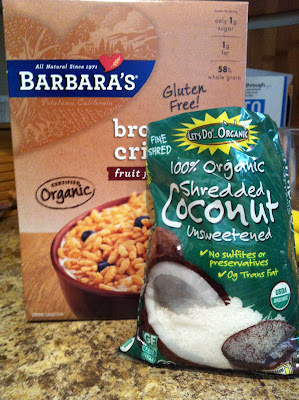 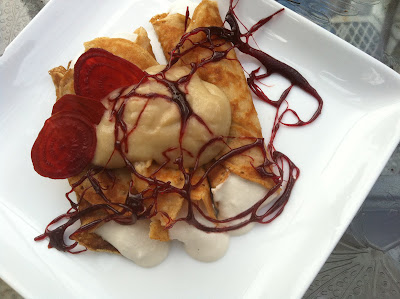 (yeah, I'm not even editing that hot mess!)
But I ate that shiitake up in lieu of dinner and know what? I totally was kicking myself that I didn't make two plates worth! Though I supposed they'd be adorned with Beet Gummies instead of Candied Beet Chips.
Oh, and here's my much less zen layout of how it all went down. 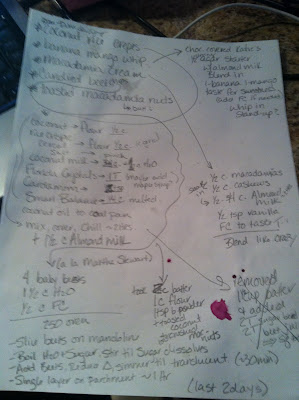 Hope everyone else had as much fun (and as much yum!) as I did!
And a shout out to Isa, thanks for inspiring me for doing more than deciding which cookbook to pirate my meal from AND making it okay for me to have dessert for dinner!