to TVP or not to TVP

I'm on the fence as to whether or not these will make another appearance (you know, aside from the one that comes from using up the remaining half bag of TVP in my pantry ;)...but it's not because they're not outrageously tasty. Behold, Vegan Vittles' Better Burgers. 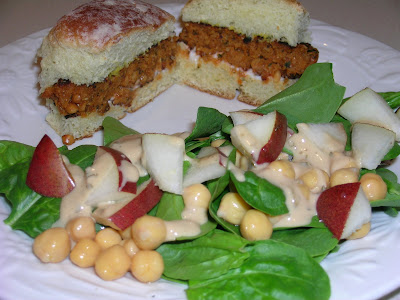 They might just be the best vegan burger I've made to date. I love the flavor and the texture and just how easy they come together. Here I served them simply on a potato roll with a bit of Vegannaise and Nutr. Yeast Mustard with a side spinach salad of pears, chickpeas, and Annie's Naturals Goddess Dressing.

So why am I questioning making them again? I bought the TVP long ago (TSP and TVP are both defatted and dried out soy) before I'd read anything about it and only heard it was easy to use and tasty from fellow veg's.

Wanting to make it somehow I found some recipes but then had also been reading my whole foods encyclopedia that pointed out (and lists it under 'toxic foods', yikes!): 'One, TVP is a highly refined byproduct of soy oil production. Two, it often causes gastric distress because it contains the hard-to-digest oligosaccharides found in soy beans. TVP is made form soy isolate, soy protein that's chemically extracted from defatted soy meal. It is extruded under high pressure and spun into bits or chunks or marketable food-stuffs'. 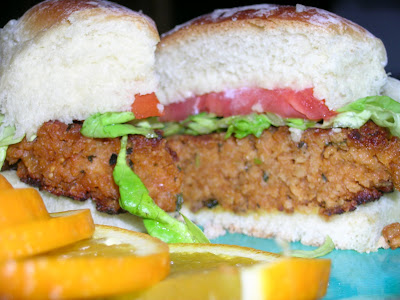 No biggie, right? if it doesn't cause you gastric distress you'd think you're in the clear. Then I did a little Googling and found this article and it got me wondering... What are your thoughts on TVP/TSP. Do you use it often, have you read any definitive info on it's health benefits or harmful effects?
Posted by Don't Get Mad, Get Vegan! at 12:33 AM

you make me hungry !!


nice work
I like it
thank you and have a nice day
:))

I don't use TVP very often, and I've always thought of it as a highly processed, non-health food... But like anything else (with the exception of trans fats), I think moderation is the key word. I buy so few processed foods that I think it's okay if I want to make some chickenless salad or some veggie patties with TVP in them, ya know? I don't think we should eat it all the time, just like eating too much soy (or anything else) in general isn't a good idea. Anyway, that's just what I think! Those patties look tasty! Thanks for bringing these questions to light... All of us need to think about and question what we're eating once in a while, I think.

While I can't answer the claims made in that article, I always have to question any argument whose main source of references is Wikipedia. People can write whatever they want in Wikipedia. The TVP entry has only one citation, and that's the American Soybean Association, so who knows where the other info comes from. The soy protein entry has more references, but I would think the arguments presented in the SV would carry more weight if the original citations were used instead of Wikipedia because who knows how the Wiki author interpreted those references. (sorry, I'm a scientist, and I take sources very seriously!)

That said, I don't use it much. As pointed out, it is not a whole food, and there are so many other options out there that I just don't see the need.

i think like laura. moderation is the key word

I've nver used TVP, and I don't know much about it. I am a little sad that you posted a really good looking burger and then a recipe about how it's bad for me :-(

But I'll agree with Laura, moderation. I do want to try these burgers...

I bought a big bag of TVP when I first became a vegan because I had very limited cooking ability and it was an easy transitioner. I still have A LOT of it left and I'm getting ready to throw it out because I just don't have much desire to use it. Like everything else, there is so much conflicting information out there. I agree with Christine regarding the SV article. They mostly only site Wikipedia and I don't trust Wiki. I think the main thing for me is that I'm really trying to shift to a diet based on Eat to Live by Dr. Fuhrman and hope to be completely on ETL by August 1. TVP definitely doesn't meet with ETL standards of healthy eating.

I have Vegan Vittles and will be making these soon-TVP fears aside--thanks for the tip!

The burgers look great. I've been wanting to make my own too but just haven't gotten myself some TVP yet.

I don't use TVP often and I still have the small bag that I bought to try from a year ago, just haven't thought to use it much.

However, that aside, I do happen to consume a lot of soy and products that have happen to have that sneaky soy isolate in them.

I definitely want to cut out a lot more soy, but it's in so much of what I like- tofu anything, tempe anything, soymilk, soy ice cream. Sigh...

Of course, it is not necessary to use textured soy protein, but it is a handy product for some things.

I have used TVP for years, with no gastric distress! In addition, organic, non-chemically-processed TVP is available now, from healthy-eating.com, for instance.

Here is what they say:
"These textured soy protein bits are made with organic soybeans, using a manufacturing process certified by the Organic Growers and Buyers Association...Because there are no chemicals used to grow or process the soybeans used in this organic product, please expect variations in size and color from one order to the next."

Here is what they say about their product:
"The unique Nexsoy® process is totally solvent-free, yielding a product line that is free of the "soy" taste that some consumers find unpalatable, leaving you free to work on developing your flavor, not masking agents. Traditionally, most soy ingredients are produced using a chemical solvent called hexane. This method is believed to be responsible for the "grassy" or "beany" flavor that has historically slowed the acceptance soyfoods. The Nexsoy® processing method is entirely mechanical and requires no chemicals such as hexane. This process is responsible for very neutral-tasting naturally-produced soy ingredients that can be used by food manufacturers without negatively impacting the flavor of their product"

I like a product called Soy Curls (butlerfoods.com), which is like stir-fry slices. It is made from the WHOLE soybean (non-GMO). It is very tender and great for stir-fries, etc. Since it contains the natural oil, I keep this dried product in the freezer.

PS: I have no affiliation to any of the above companies!! This is strictly for your information. I believe in informed judgements about food and everything else!

Thanks for the info!

I just got TVP from a health store and it almost seems too good to be true.

Back to the drawing table to find other sources of protein :)

I just found this blog because I was doing a search for "organic TVP." I used it for the first time last night, but I want to avoid GMO's entirely, and I just learned that the top 4 genetically modified crops are canola, soy, corn and rice. I looked at my bag of TVP and saw that at the bottom of the label it said "a division of (insert name of major agribiz corporation here). I know what that means - didn't say "organic" anywhere. I bought it at the health food store, but that doesn't mean it's OK - certainly don't want to get any soy that isn't organic, especially if I know it comes from one of the sources most likely to be creating frankenfoods.

Follow-up, my search led me to the website of the brand I was using, and it says they don't use genetically modified seeds - hope that's true for the soy.

Hi! I did not read all of the comments that were left so I hope I'm not repeating, but...I am a breast cancer survivor, going vegan for health and moral issues. One of the things my naturopath does NOT want me to eat is soy protein isolate. (Some breast cancers, including mine, are dependent upon estrogen for food, and soy protein isolate is a big no-no). I was reading vegan recipes and googled "is TVP healthy?" because it's in so many recipes. I vote NO!

Soy protein isolate (not ALL soy protein, just the super-concentrated form in SPI) is prostate cancer food as well.

JUST ate a burger I made like this and got to thinking about whether or not TVP is healthy...hmm...

I think I worry if soy in general is healthy re: phytoestrogens, etc. How worried should I be?

And BRYANNA! THANK YOU for your mention of soy curls. I forgot about a recipe book I have that mentions that product. Good reminder to check it out.

I only use TVP for one dish which I make roughly twice a year. I call it vegetarian chili, and my small family loves it. That said, when I first became aware of TVP I did a little research and determined it was not going to be a meat substitute for us because of its refined nature.

My wife and I no longer use TVP. We discovered that the TVP we were buying at whole foods was manufactured (first bad indicator) by a company called Archer Daniels Midland (ADM). This company, according to cornucopia.org, stated " is the second-largest single source emitter
of this toxic air pollutant [hexane] in the country. Hexane is used to isolate soy protein in most cases. I am currently trying to get Whole Foods to remove TVP from their bulk dry goods section.

I LOVE TVP! I use it almost every day. Then again, while I'm a vegetarian, I am not a health nut by any means. I like homestyle meals and comfort food. For me it's easy to substitute for meat in everything, and my meat eater husband LOVES it. Not to mention it has the protein and fiber I need. Perfect! I really don't give much thought to the whole "processed foods" fad.