Tonight was a plate of pleasant surprises that just sort of came out all kindsa yummy with a millet loaf, smashed cauliflower, green beans, and nutritional yeast gravy. The Cap'n says this one goes on the Top Ten list... 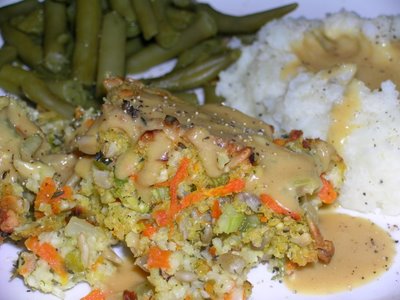 I'm kicking myself for not using Jennifer's Magical Meatloaf Studio over at Vegan Lunch Box. I had just shown it to a friend who has a little one yesterday! This must be where the urgent need for creating a loaf of some sort came from...that and this desire to finally try the millet that's been in my pantry for entirely too long. I'm still wanting to tweak this recipe, so that I can share it.

As it stands it's the teeeeniest bit dry (but not much, really) and needs some 'shrooms or something in it. I've got plans. hehe, but it's basically millet mixed with finely chopped and sauteed carrot, celery, green onion (we're currently out of all other types right now), toasted sunflower seeds, and garlic with dill, thyme, sea salt, and pepper. I baked it uncovered in a 400 degree oven for about 45 min. It was a bit stuck to the loaf pan when coming out, but the edges had a nice crunchy texture. Flavor is good, but could use a little something. I'll certainly make this again and work on it some more. 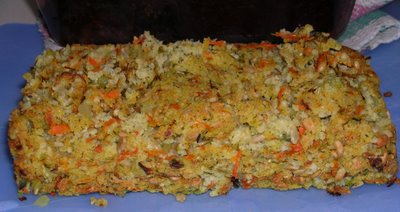 On the side I just steamed a head of cauliflower with two red potatoes we had lingering around in the pantry. Mashed them up with some Willow Run and soy milk, garlic powder, salt and pepper. I'm actually looking forward to doing this again sans the potato but I wonder if they'll need some cornstarch or something to keep it from being too wet that way. The potato was nice to give it a little structure but still taste like cauliflower.

The gravy is just a no brainer, I don't measure, just go on taste and texture here. Toast some flour and nutritional yeast in a warm sauce pot, add some olive oil and whisk (I used some roasted garlic infused variety), then add veggie stock whisking away lumps until desired consistency, then added some tamari, onion powder and sweet paprika to taste. I dare say it's some of the best damn gravy to ever come out of my kitchen! Very simple, fast and sooo tasty! Spooned over the loaf and the cauliflower this gravy was just perfect. I heated up some canned green beans in lieu of anything fresh and green we usually have in the fridge.

Get a load of this cauliflower. TOO YUMMY! 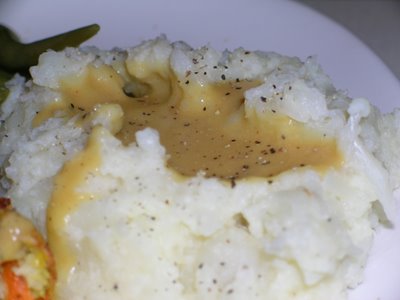 Sadly, my new beloved Vegan Planet is not without duds. I tried the Ultimate Veggie Burger as I was craving a patty of some sort. 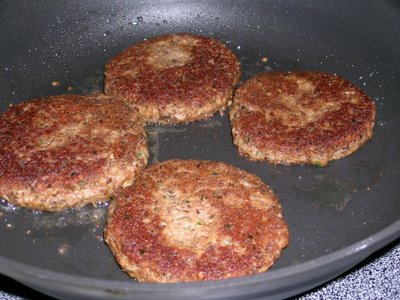 Eh, not my favorite and certainly not the Ultimate. I think that the idea to use vital wheat gluten in the recipe is great for adding some firmness in texture, but the lingering flavor is just off putting to me. 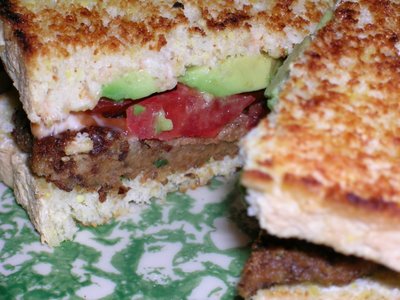 Even with fresh tomato, avacado, and some Vegannaise, it made me wanna drown it in ketchup or mustard or anything that would mask it. That's never good.

Know what IS good?! Anything Miss Dreena Burton whips up and puts in a cookbook....even anything you can come up with using one of her recipes as a guide is pretty close to perfect...behold!...my version of THE ULTIMATE veggie burger (so far, anyway ;): 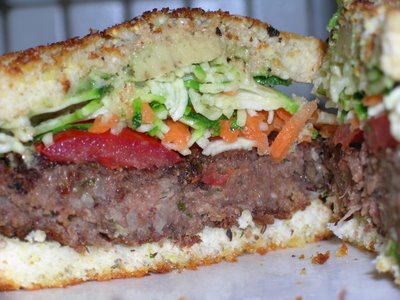 I was thinking of how much I'd enjoyed her Mushroom Pecan Burgers once upon a time but noticed that I did not have all the items on hand, namely the mushrooms and pecans. hehe. Instead I had some leftover Lentils (about a cup) and another cup of black beans. I also always have walnuts on hand so I toasted them and they subbed in for the pecans. I also always substitute cashew butter in the place of tahini because, while i love sesame seeds, tahini is always too overpowering for me to enjoy in any recipe. I followed everything else about her recipe from The Everyday Vegan, and then added two egg's worth of EnerG Egg Replacer as the 2c. of whole wheat breadcrumbs I used seemed to have made it lose some of it's stickiness while chilling, and I wanted to be sure they stayed together when cooked. Worked like a charm! I lugged 'em over to a friend's and we shared them on millet toast with boston lettuce, shredded carrot and zucchini, sliced avocado, and dijon mustard. Oh yeah, sauteed in a little peanut oil, these are nothing short of everything I want from a veggie burger. Texture was great, stayed together even thru all my flipping, and the flavor is just yummy. Even the little one was stealing 'the meat' from my friend's 'burger' after first excaiming that he didn't want it and thought they would be ooooooh, groooooss!

About a week ago I was craving my friend's Oh My Goddess Tempeh (It's from November's Vegan Feast, but blogger won't let me link to just that post, sorry!), but had no white wine in the house. No matter! I followed her recipe and used some Burgundy cooking wine (the rest of the real red wine in the house was just too delicious to share with our dinner hehe) in it's place. I also added some Agave nectar (about a tablespoon) at the end of the sauce while it was reducing. Mmmmmm, was this wonderful. 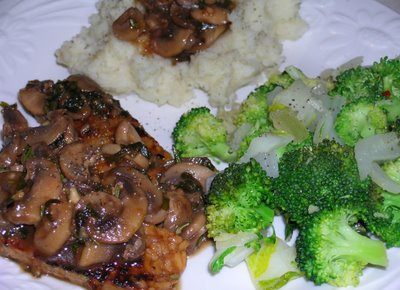 Here you see it with mashed potatoes and this great bok choy/broccoli concoction:

1/4 teaspoon red pepper flakes (only use if you like it a bit spicy!)

I loved the veggies sooo much. I swear I woke up each day ready to eat leftovers. Ok, ya got me, 's what I had for breakfast and lunch for a couple of days until it was gone! I'm calling the whole plate Oh My Goddess' Aunt Morgaine's Tempeh Dinner.
And yes, I am finally watching the Mists of Avalon that I TiVo'd, having been in luck with the books for years now.

Breakfast has been a great combo of some organic wheat/rice/bran squares with fresh rasberries, blueberries, banana, and some plain almond milk. Funny, because I always want to just eat 'real food' in the mornings and cereal for dinner. 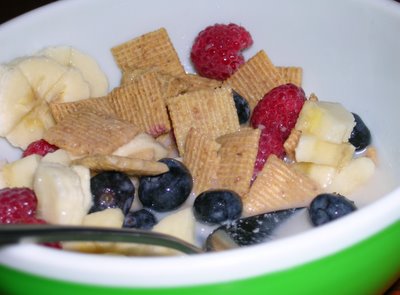 When we have friends spend the night I love to cook up something hot for breakfast. Recently we had friends over to watch THE GATORS STOMP THE HE77 OUTTA OSU TO WIN THE CHAMPIONSHIP! WOOHOO! That morning started with My version of VWaV's sundried tomato and asparagus (i use zucchini) frittata, herb roasted potatoes, and fresh avacado. Here ya see it mid scarf as I almost forgot to snap a pic of it's yumminess. 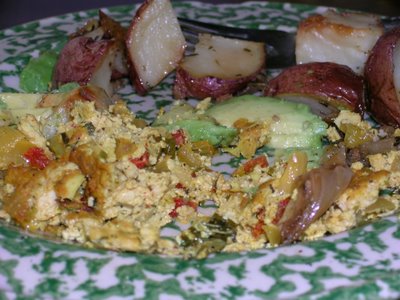 Always a crowd pleaser. I love that so many people eat this and just assume it's eggs...even when they know I'm a vegan. silly. They ooh and ah over the flavor and then i tell them it's tofu. love that startled look....as if tofu never tasted this good! ;)
Posted by Don't Get Mad, Get Vegan! at 1:07 AM

Yum! Everything looks so delicious, I don't know what to try first.

I tried the VwaV fritatta last week, but the texture didn't seem right (I used pressed tofu since that's all that's readily available here). I'll have to give it another try after my next trip out to the Asian store.

Thanks for sharing all these mouth-watering pics!

Your "magical" loaf looks good. As I read about what you did I envisioned this being made in the crockpot.... even the dry uncooked millet in at the same time as the veggies. Sometime I'm going to try such a concoction.

Great idea with that millet loaf. I haven't tried Jennifer's Magical Meatloaf Studio but I'm going to make it a point now! Everything else looks so delicious. Your pictures have me drooling.

I keep meaning to try a Magical loaf .. I just haven't yet.
Looks like you are eating very very well there in your neck of the woods.

It all looks so good that I have to come back and study these more carefully tomorrow when I'm more awake. Lol!

I did catch those mashed potatoes though, and they are looking great!!!

Wow, all of this looks delicious!
I've been wanting to try bok choy, and your recipe sounds great. I'll have to try it some time.

That veggie burger you made DOES look like the ultimate!

I love all your yummy food photos. I can't wait to try some of your recipes. Thanks for the cool comment today.

I really want to try that magical loaf studio thing but I've yet to get around to it.

And how 'bout them Gators!!! #1 in basketball now too!

Holy cooking batman!!!! I have the Vegan Planet cook book too. I find the recipes really labour intensive and unintuitive.... if that makes sense. I have tried some good recipes out of there - a thai burger wrap comes to mind... but not one of my most used cook books.

Can you change your link for me -- I've changed my blog name to veganheartdoc.blogspot.com (it's no longer outofmyveganmind). Thanks!

Oooh. Ahhhh. The frittata looks so delicious! I love it when people "can't believe it's vegan"--so satisfying. I made a nutritional yeast gravy too, slightly different but sooo good just the same. Nutritional yeast really works in that stuff.

Lol... I'm a GA fan (and student) and am supposed to HATE the Gators, but I was glad to see them win the championship!

jul- thanks! welcome to my world. i spend more time pouring over cookbooks and the internet for recipes i wanna try than i do in the kitchen some days!

don't expect the fritatta not to fall apart, it always does for me ;)

dori- i never think to break out the crockpot, but i should! good thinkin! mashed potatoes gravy, indeed good...mashed cauliflower with a couple potatoes and gravy...even BETTER! hehe

vivacious- i know, it's funny how many of us know of her amazing invention and want to try it but totally forget to use it! silly us!

madeinalaska- yeah, the folks at the grocery store are always amazed that i'm there every week to 'clean 'em out of all things healthy' hehe

candi- hope ya got some rest! and two words to add to mashed potato yummines....MASHED CAULIFLOWER!

cherry- i hope you like it! i'm totally smitten with it and can't wait to devour more bok choy. be forewardned, tho, the recipe's red pepper flakes give it a kick so leave 'm out or tune it down a bit if fire is not your thang ;)

melissa- they are indeed soooo good. just another reason you should come to your senses and move back home so i can cook for you! ;) girl can try, right? Go Gators for sure! that game was amazing!

madness- i love your blog and am continually inspired by your writing and your attitude. i'm so glad you stopped by!

chris- yup, looks like we've all been meaning to make use of jennifer's amazing creation. ;)

melissa west- hmmmm, it's a new one for me and so far i dig it, but i can see where you're coming from having perused most of their recipes.

vegandoc- thanks! they are super yummy, 'm quite proud of how they turned out. and thanks for the head's up! your link has been fixed. now if i could just catch up and add all the links to the new blogs i now frequent! whew!

laura- yup, me too. nothing better than watching people's eyes light up as they enjoy food they didn't even know could be so good...and vegan!
hehe, you're a good sport! ;)

I used your basic gravy ingredients and made my own happy grvy last night...and it turned out great! Thanks for the idea! :-)