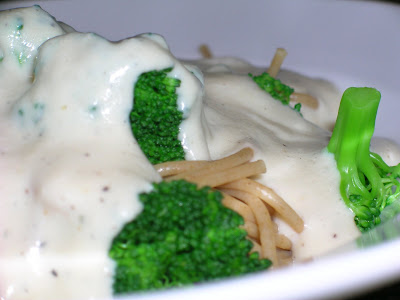 Mix all ingredients in either in a food processor or already in saucepan with hand blender. Heat over med lo heat until hot, stirring often. whisk in arrowroot/cornstarch mixture and heat until just bubbling. do not let boil. Sauce should be thicker by now. Serve and enjoy!
Posted by Don't Get Mad, Get Vegan! at 10:00 PM

Looks awesome! I've been making alfredo with tofu for years... it's one of my standby's in my tofu cooking class and of of my favorite was to trick people into eating tofu!

That sauce looks awesome.. I'm interested in her recipe.

that does look fabulous! mi marido's favorite dishes include pasta alfredo, which i just don't make - i think i'll try this one! wow!

oh my this looks amazing

Nice, thanks for sharing. I was never a fan of alfredo, but maybe I'd like vegan alfredo.

I've added you to my blogroll.

OH MY GOD that looks good!!! I know I'm not vegan ("yet", as my mother would say *wink*) but I am allergic to dairy and miss all the creamy cheesy goodness of some foods I used to eat.. I am SOOO trying this recipe! Thank you!!!

Looks so good! I did not find the recipe for the Alfredo sauce, did I miss it??

I don't think I have the right kind of tofu called for, but this looks perfect after a day digging on the beach. Thanks!

Its funny- I was never that into creamy pasta sauces since I went vegan. Now I'm all over V'Con pasta alla vodka and mac and cheeze- and maybe this one too! Thank for the heads up!

I've never tried making a creamy sauce with tofu. It was so good! I'm surprised I didn't eat the whole pot's worth. Thank you for sharing this!

be honest, is it really good? cause i have tried making some fake cheese (not from your recipies) and they suck lol not even editable. so i'm a little hesitant on mock stuff now :P

Thank you so much for this. My husband will be so happy. He misses ooey-gooey pasta dishes. While he still eats meat (gasp! I know), he cannot eat any dairy and so he's all about the vegan recipes. All these ingredients sound wonderful together.

what is earth balance (1st ingredient in the recipe)?

Terrific recipe! I went ahead and made it tonight, even though I'm not a vegan. It was terrific! I made it without the arrowroot and white wine, just because I didn't have any, and it turned out fine. I also used the Silk "plain" soymilk (which has cane juice added) and upped the sea salt by 1/4th of a teaspoon to compensate.

I had it over linguine and asparagus, and it was easily as good as any "real" alfredo I've had, and much less fat. Really tasty!

Wow! This truly is the real deal! The only vegan alfredo I've ever had that is just as decadent and satisfying as the real thing. Thanks so much for sharing this!

this does look and sound delicious! Unfortunately here in South Africa we're seriously limited re ingredients

Just served this to my non-vegan butter and meat loving friends and they all had multiple helpings. Amazing!

hey, my boyfriend and I made this for dinner Sunday night. we made it with penne pasta, and mixed in spinach, asparagus, and broccoli. it was AWESOME. we want to make it for dinner again sometime soon.

extra firm in a tetra pack, does that mean extra firm silken, then? yes?

Wow this was good, thank you for posting :) I put it up on my own vegan blog after I made it this evening for dinner.

This was a good sauce, but it definitely needed a little zing to make it more authentically cheesy. I added a few tablespoons of lemon juice and it made it so much better!

I just made this and it was great! I added some sauteed mushrooms and onions and I am happy and full now :) It does have this strong "raw tofu" smell, which I don't like, but it tastes even better than I remember real alfredo sauce being!

I made it exactly as written and it was delicious! I haven't had alfredo since I went vegan - I guess I always thought it would require expensive specialty ingredients and still not be as good as the real thing. But this is so smooth and creamy, in my opinion it's superior to regular dairy alfredo in every way. It's ridiculously simple and the ingredients are cheap & easy to find. And it makes a ton of sauce, enough to drench a pound of pasta & toppings and still have enough left over to dip garlic bread in. I served mine over whole wheat fettucine with sauteed onions and mushrooms and roasted broccoli. Thanks for the awesome recipe, I'll be making it again and again!

Simply Amazing! And so easy!! Thank you!!!! I can't do dairy and have been craving Alfredo for years.

I'm definitely not a fan of this recipe. It was pretty bland and spicy. The only thing good about it was the texture. I'm going to stick to other vegan alfredo recipes. Sorry. I think it needs some nutritional yeast for sure, maybe something more than that.

Hi - Rad vegan site! I'm planning to feature it on a VegVine.com browser bar for vegetarians. We are a group of vegan volunteers connecting people with veg resources like yours. Our goal is a world with greater compassion. It seems like we share that. If you can squeeze it into your schedule I'd love to chat. Ryan, president http://www.VegVine.com (Ryan@VegVine.com or 215-589-2437) VegVineRyan@Gmail.com

This was absolutely fantastic. Added the nutritional yeast and peas and it was perfection. My husband doesn't like Alfredo, so I added some marinara to his and he had it blush style.

This was amazing! I've been craving alfredo for forever & other recipes I've tried had made me give up on ever having it again! My roommates, who aren't even huge fans of white sauces, think this is the best thing ever.

I threw in a tablespoon of nutritional yeast & a tablespoon of lemon juice, & half the amount of arrowroot & it was PERFECT. Thank you so much for enhancing my vegan life!

I just finished making this for Easter dinner for my all meat eating Italian family!! I'm not telling them its vegan till after its gone bahahs! Thanks!!

Hilariously cool. I have been looking for sites like this for a long time. Thank you my friend.

The texture and thickness was perfect, however, I would add fresh chives and garlic to add more zest.