I have a few go-to salad dressing recipes.

That Ginger Dressing, scroll down. waaaaay down.

Typically, I only ever used agave mustard previously as a dip for seitan. It was only recently that I remembered, before going vegan, occasionally enjoying it on salads in it's honey-laden form.

As a dip, I would mix one part Vegenaise with one part Dijon Mustard, then sweeten with Agave until it reached desired flavor. I find agave super sweet so I have never measured, I just add maybe a tsp at a time and whisk until it helps sweeten but isn't overbearing. As a dip this was fine. I never really tinkered with it and loved dipping seitan 'nuggets' in it, got rave reviews.

Today I changed my recipe a bit to balance the ratios to taste more like a traditional 'Honey Mustard' dressing and then also added Rice Wine Vinegar, thanks to Alton Brown who doesn't use a mayo base at all in his recipe for the non-vegan, Honey Mustard variety. In addition, I have switched Dijon mustard for horseradish mustard as I prefer the bite and flavor of horseradish. I'd love to get my hands on some fresh horseradish. I think it's a perfect mate for mustard in this kind of dressing, matching the sweet of agave with it's flavorful kick of heat.

Wondering if maybe I'd prefer my Agave Mustard sans Vegenaise I decided to have a Salad Off. Yep, It's come to this. My refrigerator is so packed with delicious Vegan MoFo leftovers that I've resorted to pitting salad dressing against salad dressing. 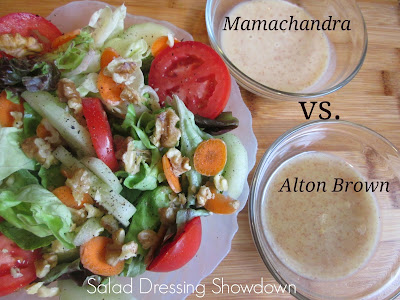 I'm just as surprised as you are*.

As for the salad to showcase the showdown, nothing fancy here. Just a butter lettuce blend base with chopped cucumbers, tomatoes, carrots and some walnuts. An easy, fresh side dish to accompany any meal, using produce we almost always have on-hand, this salad would let the dressing shine to best decide if I favored one preparation over the other. My plan was to drizzle one tablespoon of my Agave Mustard Dressing on one side of the salad and then a tablespoon of 'the opposing dressing' on the other. I'd take a bite or two from one side and note my thoughts. Then I'd repeat on the other side.

Would my new go-to become the more calorie-laden style including Vegenaise or the lightened up version with fewer ingredients? Would the lighter version lack creaminess and flavor? Who would win this battle of the salad dressings?

Here are the recipes:

Whisk together until well blended. Serve over salad or as a dip.

Whisk together until well blended.
Serve over salad or as a dip.


The verdict? In appearance, Mamachandra's Agave Mustard is lighter, and doesn't seem to separate when left in the refrigerator over night, likely thanks to the oil in the Vegenaise emulsifying with the other ingredients when whisked together. The dressing I came up with is creamy, just sweet enough with a mustardy taste, a nice kick from the horseradish and tang from the rice wine vinegar.

Looking at the Alton Brown Inspired Agave Mustard dressing, I could tell this would separate. It already needed a good stir before putting on the salad. This is not a deal-breaker, because most all homemade salad dressings I know of require a little lovin' shake before using. This stuff is also really good. It's sweeter than I'd like, but that could be adjusted by making again with less agave. It's tanginess is a bit more pronounced. There's no subtlety here. I think this would be great dressed with the right greens. Arugula's peppery bite would be nice against the sweet and tang.

The Victor? I have to go with my own creation as my new go-to for a sweet, tangy Agave Mustard salad dressing. I prefer how balanced and creamy the addition of Vegenaise makes it. I still highly recommend the other version, though. Especially for anyone avoiding oil or just wanting to rely less on oil and processed foods in their diet. I could learn a little something from them and am inspired to tinker with the amount of agave in it. I'd also really like to learn to make my own vegan mayo stand-in as Vegenaise isn't cheap and has more ingredients in it than I really like in a staple item.  (I have been eyeing this one over at Magic Jelly for a while).  Wouldn't be a bad thing to break my blue lable addiction. sigh.

But for now, while this giant jar of Vegenaise is residing in my 'fridge, Mamachandra's Agave Mustard Salad Dressing will be making appearances in many salads near me.


*I started to type up the verdict as one would expect a commentator to describe each dressing as prize fighters after a  boxing match. I scratched it and stuck to what I know. You're welcome. ;)