I've mentioned before that store-bought seitan never really won me over. It always tasted 'off' to me. Sunday, I decided to dive in and make my own and used the recipe in VwaV. Finally, tonight, I made this with it: 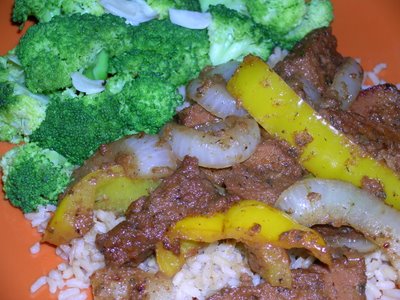 It's VwaV's Jerk Seitan. I substitued yellow bell pepper for the green mostly because I just can't stand green bell peppers, but also because i knew i'd be making some steamed garlic broccoli and the yellow was a nice contrast (i'm a sucker for having a plate full of colors).

I am now an official seitan worshipper. this stuff is GREAT!!! not only does it taste great (i think that next time, however, i'll make my own veggie broth-something i've yet to do, but i really don't love the flavor of anyone i've come across. i used Emeril's organic veggie broth tonight and it still just had that overly not fresh taste that i could do without), but the texture of the seitan is PERFECT, AND it's finally another source of protein that is not reliant on some sort of soy. while i've got no problem with soy and happen to love it, actually, i think that it's wise to not rely to heavily on any one food for the majority of any nutritional component. the seitan and broccoli were paired with some brown rice, but next time (assuming it doesn't follow yet another looong day of errand running) i'd like to try the coconut rice from VwaV. tonight was our old standby, Uncle Ben's long grain brown rice micro packs. they're just too darn easy and quick to not use on a night like tonight!

oh, and dessert? some dried mango from Whole Foods 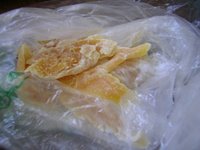 and some raw almonds. what can i say, i'm a mango fiend!

My stomach actually growled while I was reading this. I love mango and I think after I try a few of these out and see how I do, I might cook one of them for the guy I am seeing. Maybe I can turn another one!