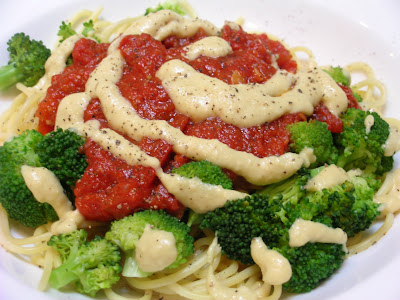 the Cap'n and I had previously enjoyed a simple meal of pasta and homemade red sauce. I thought the cashew cheeze would be a nice addition when enjoying the leftovers with some broccoli....and it so was!

I wouldn't be me if I didn't jump at the chance to throw various leftovers together in odd combinations just to get them polished off. This is how the remaining pasta ended up being topped with the last of the red sauce (man! the homemade stuff just gets better and better with each day it sits in the fridge, doesn't it?), more cashew cheeze and crumbled quinoa patties. A healthy dusting of nutritional yeast and I'll be darned if this wasn't the tastiest thing I've thrown together in a while! 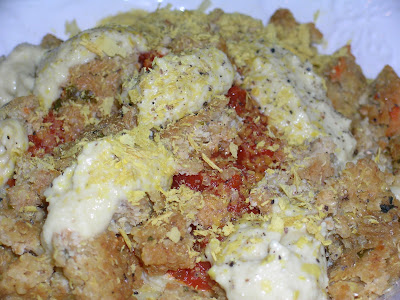 I am serious when I tell you that I can never get enough of Dreena's stuffed portabello mushrooms from TEV. As I've mentioned before, I don't even need the recipe now to whip them up. This time I subbed out the breadcrumbs in the stuffing for leftover quinoa. OH YUM! since I never put tofu in mine the quinoa was a nice punch of protein even if they were a little wetter than they typically would be. think: juicy! mmmmmmm 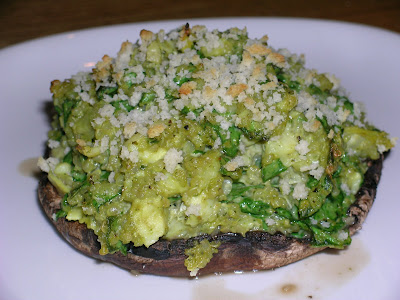 And I finally threw some seitan ribz on the George Foreman to heat up some leftovers. I think these were Celine's version that had been marinading in the bbq sauce in our fridge from the last family gathering. 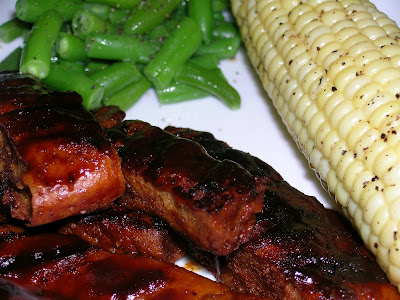 I loooooved how they stayed tender on the inside but got that charred harder exterior on the outside from the grilling. With some of the summers bounty of corn and some easily heated up frozen green beans, this made for a really quick meal that was filling and super tasty.

I'm currently blogging this from the FBO in Key West where we've been for the holiday weekend. I don't have much to share about this trip, one...because neither one of us remembered a camera, and two....because this whole island is sooooooo not accomodating for a vegan. there were a couple highlights tho, so I look forward to finding a fun way to share them with you sans my own photos once we're settled in back home. Hope you all had a wonderful weekend!

That first pasta dish is right up my alley.. I broccoli and red sauce together.. I haven't made the cashew cheez from the new vegan vittles. I'll have to give it a whirl..

meep! sorry to hear you're having a hard time as a vegan over there. be safe and have fun anyway!!!

I love how the sauce looks!

okay, okay . . . you've convinced me that i need to make the cashew cheeze. i like yr swirls.

That cashew cheese looks mighty tasty! Leftovers are so handy...I used to be very weary of them (not sure why) but now I love making big batches of food and eating it several days in a row.
Hope you had an enjoyable holiday weekend, even if it wasn't filled with any good vegan food to speak of...

Is the cashew cheeze recipe from the new Vegan Vittles cookbook? I have the first edition of the book and was excited about making the cheeze until I couldn't find it anywhere...Oh well. Guess I'll have to buy the new one too...