You know those nights where you can't decide what to make for dinner even though you just went grocery shopping because you failed to 'meal plan'? You peruse your haul and the ingredients just swim before you...spinach...mushrooms...sundried tomatoes... Spinach sauce? you wonder. Is there such a thing? Should I attempt to make one if there's not?

No? Just me? Well, after this little scenario in the kitchen tonight, I thumbed thru Vegan Fusion World Cuisine for some inspiration (such a beautiful, beautiful cookbook) and sure enough, spinach mushroom sauce awaited me!
Luckily, a great friend had come over to catch up and help whip up dinner (it totally helps to have two sets of hands when there's a toddler on the loose!). Hi Joey! Together we chopped, stirred and tweaked what started out a great recipe and ended up an amazing dinner, Whole Wheat Spaghetti with Spinach Mushroom Sauce (with sundried tomatoes, saffron, roasted cauliflower and garlic, and hempseed). 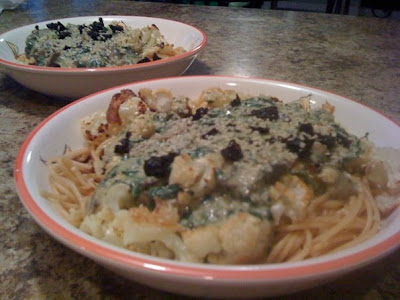 Basically, we followed the original recipe with these changes:
no shiitakes in the house, so button mushrooms were used
we added more spinach...because we wanted to
we added garlic....because hello! garlic!
we added a healthy dose of nutritional yeast. not too much, but 1 teaspoon? why bother?
we may or may not have used shoyu as the recipe called for. Joey?
we added a bit of cornstarch because it wouldn't thicken without it, really
plated it with roasted cauliflower and more garlic (such a great last min idea, perfect combo)
some chopped sundried tomatoes and a bit of hempseed topped off the dish

It was really tasty. I honestly would love to try it with some earthy shiitakes. The cauliflower added some saltiness, the tomatoes a bit of tart flavor, and the hempseed added that amazing crunchy thang that only hempseed can add.

Basically? I loved it. Can ya tell? Can't wait to make it again (and the leftover sauce is gonna be amazing on top of some zucchini rasta tomorrow. yum!

oh, and thanks again to Joey (the Great) for whipping out his iPhone and snapping a photo when my camera informed me that yes, the battery was indeed dead.

Spectacular! I definitely want to make something like that. I am getting tired of the plain old Garlic and Olive Oil tomato sauce that I use. Thanks for the inspiration! :)

I have this book and have yet to make anything out of it. It's nice to have a suggestion! Looks great!

It is always a treat to cook with other people. Food is such a social event!

That looks delicious, I love mushrooms & spinach. I'll have to get myself a copy of Vegan Fusion soon!

Yummy!! This looks delicious. I'm gonna check that book out. Thanks!

Your methods sound a lot like mine! I've accidentally created many a pasta sauce in this manner. This looks like a winner.

I bought that book recently in Portland after eating once again at our favorite restaurant , Blossoming Lotus, in the Pearl District. (We live in the Seattle area.)
Thanks for inspiring me to make this fab looking recipe, and for including all your adaptations!
Donna in Kirkland,Wa