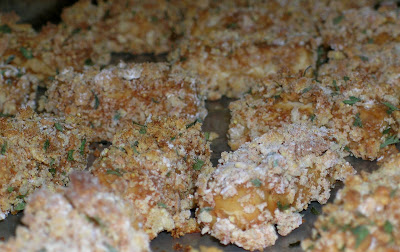 Ok, so maybe I'm just a dorky Cure fan of old and can never come up with clever post titles. ;) But it really was just after 10 when I finally sat down to eat on this recent lonely Friday eve when the Cap'n was working late.

Funny, 'cause I'd been dreaming up this dinner for m'self even before I saw that Urban Vegan had enjoyed a very similar meal on her recent Girl's Night In. Seeing how yummy hers turned out just clinched it!

So, mine started out with a simple salad that I found in my The Mediterranean Vegan Kitchen cookbook. It's very basic in that it consists of romaine lettuce and the dressing. 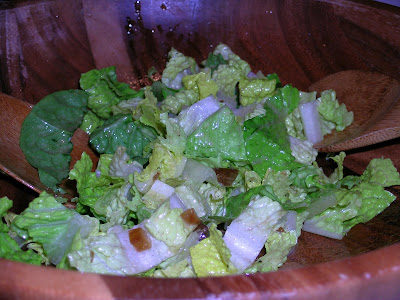 The dressing is pretty interesting as it showcases lemon juice, cinnamon, and chopped dates among it's ingredients. I found that, when you get a dateless bite it's very (almost too, but not quite) lemony. Then you snag a sweet little date and it's a flavor party in your mouth! The cinnamon really shines thru then. I'm thinking of giving the whole dressing a whirl in the food processor next time, making the dates more a part of the dressing and seeing what happens that way.

As the recipe only calls for romaine and the dressing, it makes for a pretty boring picture but refreshing and delightful and easy salad to start a meal. this would go great with something spicy.

For dinner I made some tofu sticks from Vegan Planet using homemade millet bread breadcrumbs and also made Isa's Sweet Potato Fries. I love the cumin/coriander spice with a little homemade agave mustard dipping sauce (equal parts of vegannaise, agave nectar, and dijon mustard...you can add Tofutti Sr. Crm. too but it's not imperative). 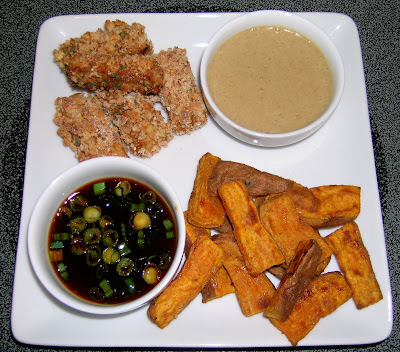 I like their seasoning of the breadcrumbs for the tofu stix but not so much the marinade or dipping sauce. I think next time I'll marinade like the basic asian inspired one found in VWaV and Dreena's ginger dipping sauce from Vive, as they each suit my tastes better.
Posted by Don't Get Mad, Get Vegan! at 5:41 PM

Looks great! I love the idea of blending up that salad dressing so you can taste the dates in each bite!!

Mmm! I want some of that agave/dijon/veganaise dipping sauce!!!

Ooh that looks really great. I want to make both the nuggets AND the sweet potato fries. I think I will!

That looks delicious! Thanks for posting about the dipping sauce--I've been too lazy to try to come up with a "honey mustard" sauce but you have done it for me! Perfect! I love Isa's sweet potato fries too....

I didn't get to comment on the previous post, so let me just say that this AND everything from the previous looks fabulous as usual. I've been anxious to try the samosas - yours turned out great!

I never had much luck with my bread machine, so I use it only for kneading the dough and letting it rise. Then I take it out and put it in the pan, let it rise 30 minutes more, then bake it in the oven. I always get good results this way.

Love it! Going to try the tofu sticks tonight, and those sweet potatoe fries look interesting as well...

I too am in love with the seasoning combo on the sweet potato fries from VWAV. About a month went by and I swear, we ate them every other day.

i like your idea of blending up that salad dressing so you can taste the dates in each bite, yum.