Upon returning home from our weekend trip, I found myself surveying the contents of our fridge. It was slim pickins, but once the Cap'n insisted, after sampling it with me, that I must've added sugar to the leftover corn I'd cut off the cob I knew what had to be done. Sure, I'd never made Corn Chowder before...hell, I'm not even sure I'd ever had it...but with the little bit we had to put into it I knew it would work out just right. 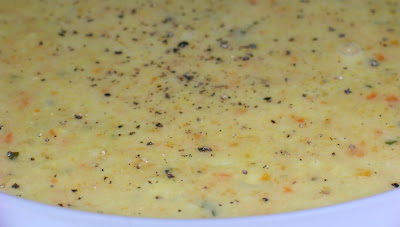 Simple Corn Chowder
serves 2
the measurements are approximate, adjusted to how much corn we had leftover to use

1 Tablespoon olive oil
1/2 c. onion, finely chopped
couple pinches celery seed (I often find that I'm out of celery and this works just fine, if you have the fresh stuff, tho I'd say toss in 1/2 c. of that as well)
2 med. carrots, shredded
2-3 cloves garlic, minced
1 1/4 c. water
1 tsp veg. bouillon (I'll admit, I'm tired of my veggie bouillon taking over the taste of everything I do so I opted for just under a tsp. of light miso and a touch of the bouillon instead)
1 c. corn (ours was sweet white, previously boiled and cut off the cob)
1 c. plain soy milk
1 1/2 tsp. flour
1/2 tsp. dried parsley
1 tsp. sea salt
1/2 tsp. garlic powder
1/2 tsp. cracked black pepper

1. heat olive oil in skillet and add onion, garlic, and carrot, and celery seed sauteing until just tender. 2. Boil water in separate small saucepan, add miso or bouillon (or mixture) and whisk until dissolved. 3. Add veggies and corn to water and simmer until your veggies are tender. this shouldn't take long at all if you cut them up as small as the corn like I did. 4. Add soy milk and whisk in flour. 5. Stir in herbs and spices, and cook, stirring occasionally, until thickened consistency.

Shouldn't take more than 15 min but I broke down and broke out the immersion blender and whirred it up a bit to give it a creamier texture. (honestly, there are few dishes around here that get made without the help of that thing. easily my most favorite kitchen appliance!)

You can garnish with a tsp of Tofutti Sour Cream stirred in like I did or just enjoy this plain. It got a big thumbs up from the Cap'n and it's easily a new favorite for me. I think it'd be fun to play with smokey or mexican flavors or just jazz it up for a fresh flavor with some dill.

looks great! one of my all time favorite soups/chowders. i add a bit of freshly ground nutmeg and a pinch of cinnamon to my corn chowder. trust me, its awesome.

Sounds like a great way to use leftover corn! Or just a reason to go out and buy some. I don't think I've ever made a corn chowder, but I think I see it in my future!

That looks so good. While I was reading the recipe through, I was thinking I would sprinkle some cilantro on top. I think I've made corn chowder once before and really enjoyed it.

Great way to use up the harvest. I love any kind of chowder.

What a great way to use leftover corn... I'm gonna have to try and remember that.

what a great idea! There's so much fresh corn at the market right now still.

This sounds lovely! I may have to try it out soon.

I also had corn chowder for the first time last week! I made the one from VWaV, but it was a little bit too sweet for my liking, so I'll try yours next time! Specially since there's six itty-bitty corn cobs growing in our garden...Nutmeg sounds like it would be awesome in chowder. I'm also thinking I'll use oatmilk-soymilk always curdles when I try to heat it, and maybe roast the corn for more flavour...

i just made this soup, and it was absolutely incredible. i added fresh carrots, potatoes, and celery.

i also dissolved some of that vege mix stuff (i can't remember the name, it comes in a powder and is mixed with water) into no-chicken broth and poured that over the pan that was sauteeing the potatoes and vegetables. then i added that into a pot of warm (but not boiling) soymilk and broth, along with the corn. AMAZING!

i blended about a third of the soup and put it back in to make it creamier. i also added fresh thyme. very very good =) thanks for the base recipe.