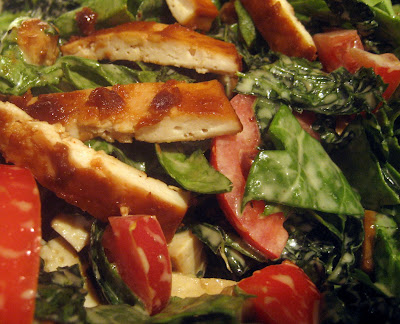 These are not words I've ever uttered, but I'm shouting 'em now. Oh, yeah...hi! Remember me? With a very active 14 month walking, babbling little one around, I rarely have time to do much other than feed, play with,and chase her. I hardly ever get to peruse the blogs, but I'm so glad I did recently and stumbled upon this yummy gem!

Vegan YumYum posted a salad much like this one as a BLT salad. She used smoky tempeh fak'n (which is fantastic, btw), but the night I made the above version (and after trying it once, I've had this salad no less than four times!) I only had tofu in the 'fridge so I went for a smoky miso tofu instead.

As I said, raw kale has never been my thing. I've tried so hard to embrace it, but it's never been all that palatable to me. I'll boil it a bit and freeze small ice cube portions and toss it in smoothies (and hallelujah for that since Taylor is in that phase where fruit rules and smoothies are often the only way I can sneak some veggies into her day). I'll occasionally boil it an enjoy it quite well with some garlicky black eyed peas or throw in a soup, but that's the extent of my kale love, typically.

But thanks to this idea and a tip from a commenter on VYY's thread, I'm HOOKED!

Basically, the original called for using Dinosaur/Lacinato Blue, raw kale and spinach, smoky tempeh fak'n, and cooking grape tomatoes in the hot oil from heating the fak'n and a homemade simple Veganaise based dressing. truly perfection just as she intended.

But while my taste buds do prefer the tempeh, I'm currently on a pretty low carb diet (thank you baby weight and high blood pressure issues!) to get down to my prepregnancy weight. (hence the never blogging because most of my quick meals are bo-ring!). So I find marinating some tofu and baking it are a nice alternative. I based my smoky miso tempeh loosely on VYY's version as I didn't really measure anything, just used her ingredients and I subbed smoked paprika for the Liquid Smoke as I didn't have any (gasp! must add that to the grocery list!)

Also, to cut on fat and because I LOVE fresh tomatoes at summer's end, I don't cook them...I just chop some plum tomatoes or a big Ugly tomato and toss it in at the end.

As for how to make the kale perfect, follow the commenter's tip (here's VYY's original recipe) and wash your kale, dry it, cut it from the stem, and cut into thin slivers. Make your dressing and toss with the kale. using your hands, massage it into the kale leaves....then cover and refrigerate. I found that preparing the kale the night before or even just in the morning and leaving it to sit in the 'fridge all day was perfect!). Before serving, cook up your protein of choice, cut up your spinach and tomato and toss with your now wilted, chilled and pliable kale. the texture is really great. the flavor sings. honestly, I don't know how you'll NOT end up eating this salad a couple times a week and wonder how you ever turned your nose up at raw kale all that time! I need to thin the dressing out a bit myself to hopefully ease up on the fat content but still offer the kale a fat and an acid to help break it down.

now if you'll excuse me, I have a crazy little girl who needs to play with her momma.
hopefully, I'll stumble upon something else new and wonderful and be able to blog about it again before oh, i don't know, another million months roll on by!

much love to all, hope you're enjoying the tail end of your summer!

Sounds really yummy! I love kale, but I usually steam mine. I will have to try this. Thanks :)

Katie from Don't Worry, Be Happy, Be Vegan :)

The salad looks yummy. I have not been too big on kale either. Maybe I can eat some like this.

Thanks for the tip!

That smoky miso tofu sounds delicious - is there an estimated recipe for that?

eliser, I edited the post to link to Vegan Yum Yum's recipe, which I used as a guide but had to sub smoked paprika for the Liquid Smoke as I am currently out. I'm thinking that VWaV's tempeh marinade on some tofu would be an excellent addition as well!

thanks so much! your blog is delicious :)

Raw kale tastes a tad bitter to me, but I usually make a salad with it (Kale, onion, pepper, mushroom, celery, crumbled merinated tofu), and mix it with a spicey tomato chinese sauce. Tastes great and travels well.

I've also read that salting the kale before eating it removes the bitterness.