In deciding to participate in Vegan Month of Food III, I was at a loss as to what theme I'd base my thirty-one posts on. I figured 'what a vegan eats every day for a month' was pretty much all I could muster up. Turns out, each post thus far (all three, woohoo!) have pretty much been meals that cling to the end of Summer. "But it's October!" you're thinking. I know, but here in the Sunshine State, we let Summer linger.
That said, what better way to embrace the last warm, sunny days of summer than a dish that revolves around corn? Sweet, golden, crunchy corn. I've heard so many good things about Veganomicon's Southwest Corn Pudding that I knew that I'd be bringing that to the Pot Luck Kickball Birthday Party in the Park that we attended earlier tonight. 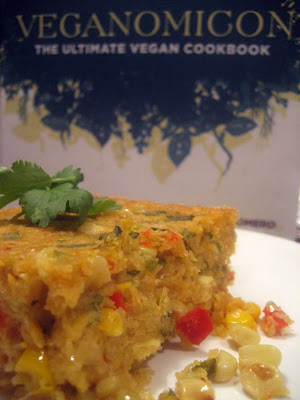 Um...in a word? WOW! This stuff is so flavorful and moist, no...velvety...and crunchy but soft, not overwhelmingly southwestern flavored but just enough bite and hint of cilantro to match perfectly with the sweetness of summer corn. yum!
Since this was for a potluck and the original recipe is made in an 8x8 pan, I doubled the recipe and made mine in a 9x13 pan instead*. The only changes that I made were that I limited the hot peppers. In my trip to the grocery store I was met in the produce section by one very lonely jalapeno on the shelves. I opted to use that and one Serrano pepper and left out the cayenne. I would have liked the jalapenos if I could have gotten them and would have used three to capture the flavor, but I like the barely there kick that one Serrano lent to the dish.
Also, there were tons of kids in attendance and I like that it wasn't hot enough to torture their taste buds or their tummies. It was a hit! I only had enough left to take a pic or two for the blog!
No matter where you live or what season you feel like you're enjoying, I highly recommend swiping up any bright, beautiful ears of corn you can find and enjoying this colorful, tasty dish soon! 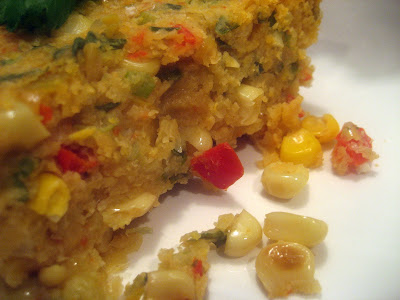 *I sauteed the corn and red pepper in my giant iron skillet pan and had my heart set on baking it and serving it in that as well, but I think I'll have a post in the future about the woes of trying to work with a less than perfectly seasoned iron pan and how to fix that. Also, carrying that puppy plus blanket, toys, and toddler in tow across a couple sports fields to get to our destination would have been more than I could swing!

Oh, I should also mention that a ppk'er had a great idea for making this dish for a pot luck setting by way of portioning it out in muffin pans and cooking that way to create individual servings. As I'd never made it before, I wasn't sure if it was really going to be more like a bread or a pudding and I didn't want to overcook it and have it be dry. As it turns out, it cooks up like a perfectly moist, soft bready pudding so I think it'd have been fine either way!

Wow, I always thought it was more of a pudding, not like a cornbread! How interesting! I'm sure all the potluckers lovvvvved you!

wow i'm drooooling over that corn pudding..
yours looks amazing and i need to make it asap, definitely.

Wow. I can't believe I haven't made that yet. Looks great!