Well, if I'm gonna attempt to blog all month for Vegan MoFo and fall short, totally not making my goal of blogging daily, at least I'm going out with a bang!

This is a recipe that I've been drooling over for a while from Tracy's blog. She came out with a cookbook* that I didn't realize she'd put together so, naturally, I bought it immediately (five bucks for a dowload? a STEAL!). Those of you who've frequented her blog may know that she does spectacular things with seitan. This recipe? No exception! 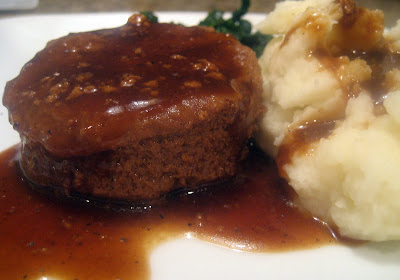 The seitan is boiled in this recipe and the texture is spot on. The au jus is wonderful. My only complaint really has to do with the fact that I've no knowledge of the bouillion she uses (Nutri-Max?) and used the one I have on hand (Better Than Bouillion) in the same ratio, not really knowing if it would make it too salty. It did. It was just this side of edible as is after reducing some of the au jus to spoon on top. I'm thinking that when I make the leftover 'steaks' I can thin the juices out with water and I'm dreaming up a wine based reduction to glaze them with. I'm hoping that will help get rid of some of that salt.
I served this with a quick mashed potato and some dinosaur kale. I have to say that this was the BEST kale I've ever made, hands down. Nothing crazy, totally simple execution. I prepped it(removed stemps and chopped), rinsed it, and boiled it for about twenty minutes. i then squeezed out as much excess water as I could and tossed it with a dressing that was equal parts olive oil, lemon juice, and shoyu. (I made a dressing that was two tablespoons of each ingredient but only used a splash of it in my kale as the portion I cooked was only enough for two people. the rest is in the 'fridge awaiting the next side of kale). I may never eat my kale any other way again. For serious! 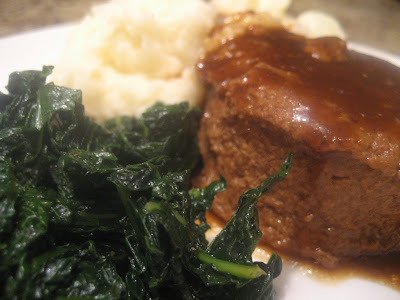 This meal was perfect to end MoFo for me on the eve of Halloween as it was spooky and fun. Spooky in that it eerily mimicked a steak and fun in that it was probably the dreamiest seitan dough I've ever made. I'm looking forward to making this one again and again and just adjusting my broth a bit to get the salt content down.

*I've linked to the post where she offers up this recipe. Make it, you'll be in a hurry to cough up your five bucks for more!

I have always passed on that recipe, since it uses tofu. However, now that I know how well the trick of subsituting white beans for tofu works, I may have to try this. It might be Christmas dinner.

That looks amazing! Too bad about the salt, but after seeing the magic you work with leftovers, I'm sure you'll remedy the situation! Happy MoFo!

Hey there! Just thought I'd answer your question by gettin' personal and visiting! You asked me about the salt content...yeah, I confess, it can be salty. Our family has an unfortunate love of all things salty, and I confess that you are not the first person to mention that. I always create things that taste good to me, and then hopefully others might feel the same. I know some people develop recipes with the tastebuds of others in mind, but me...nah. I'd just recommend perhaps using low-salt soya sauce or a lower salt bouillon. The one I use is made by El Peto and has a whopping 420 mg per tsp. (Holy moley! That's a lot, eh? Never looked before now..:0)Thanks for asking the question, BTW....