I don't know about you, but I'm a sucker for any new product I come across that is vegan and makes whipping up dinner easier. Something to shake things up when I haven't pressed my tofu, don't feel like boiling my tempeh, haven't got the time to make seitan and rice and beans ain't gonna cut it is a nice break from the norm. Because of this, I LOVE Soy Curls, have had love affairs with canned seitan patties, and have shacked up plenty with many, many varieties of veggie 'burgers'.

So when I saw Gardein at Publix I was intrigued. It plainly said it was vegan (score!), and appeared to be a versatile product. Low in fat and carbs was a bonus, even if the sodium content wasn't that low (something I try to look for). For an occasional dinner I figured it was worth trying.
The first variety that caught my eye was the Scallopini. Like thin chicken cutlets with a light seasoning and a simple serving suggestion on the back they looked promising. 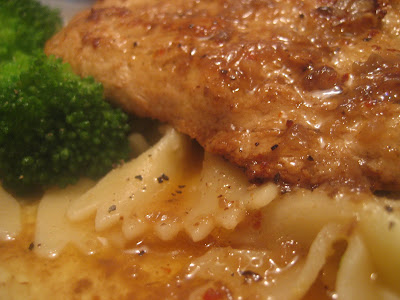 I decided to follow their serving suggestion on the package, but I didn't have capers (I thought I did!), so I added a bit of brine from a jar of olives. In retrospect I should have tasted as I went because, as the sauce reduced HELLO SALT! these were almost inedible. Totally my fault. I couldn't really vouch for whether the product was good or a bust until I tried them again. 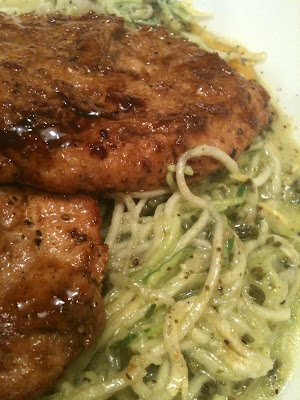 This time I did my go-to marsala but without the mushrooms. I basically heated them in hot smart balance and added a good amount of marsala wine and lemon juice and let it reduce down until it was thick and sticky. I served the two cutlets over just barely heated zucchini pasta that I had tossed with basil pesto.
Pretty good! Basically, these are like Morning Star Farm's Chik'n Meal Starters, but not in strips, in cutlets. They reminded me so much of them that I was tempted to Google as to whether or not this company had anything to do with MSF. I'm not a huge fan of those to begin with, so it's not a total win, but anything in a rich marsala sauce for me is just fine, so it's not a total loss either. I imagine that the sauce makes it for me with this one. Just make a rich sauce or something with a lot of flavor and the flavor will be great, the texture a little soft but overall pretty good for a quick meal.
I did try the Chick'n strips that were breaded also. I made them for my daughter who, as a toddler, could take 'em or leave 'em but that's basically how she feels about most foods. I, on the other hand, thought they were tasty, but devoid of ketchup or agave mustard they have a flavor not unlike veggie dogs which I find odd as they're supposed to mimic a white meat, not hot dogs.
Again, not great, not bad!
I do have the Beefless Tips in the freezer that I still want to try. I'm thinking they'd also be great as marsala or in a stroganoff. If they're great, I'll likely try another variety, if they're just so-so like Chick'n options that I've tried I'll likely just not buy them again.

Sorry I've totally dropped the ball with Vegan MoFo. I've been swamped bridal showers and weddings, oh my! I am an ordained minister and writing the ceremonies is such a labor of love for me to totally labor intensive. I've spent so many hours at the computer that blogging has not been something I've wanted to do. I also spent a LOT of nights making samosas a la VWaV, three dozen for a bridal shower and then six dozen miniature ones for a wedding last Saturday. SIX DOZEN! They're really fun to make up to about three dozen, I say. ;) They were a hit and I'm really glad I could help round out the happy couple's menu, but whew! I'm glad that's over. I don't have a picture of them (tho I just may take one of the dozen or so that ended up back in my refrigerator), but I do have this... 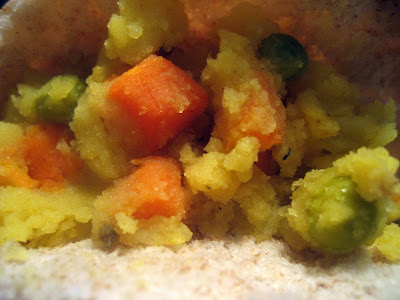 this is what I snacked on while making them. I threw a couple scoops of the filling in a warmed pita and Mmm Mmm Mmm! was able to keep chuggin along. If you haven't tried these babies yet, get to it! They're incredible!

I bought the Beefless Tips (I think the Publix closest to I75 on Archer has a big selection of vegan frozen food). They're pretty good but the texture is a little iffy. Probably would be good in a stir fry! The food pics look delish :)

Hi. I think you're right about the connection between Gardein and MSF. Gardein is now making the "beef" that MSF stopped making. It's the exact same product. My Publix doesn't carry Gardein, regrettably; I have to go to Whole Foods. Hmmm ... maybe that's changing ....

I love the beefless tips. My wife uses the juices to create a stir fry (add some Bragg's). Yeah, the texture is a bit weird since it seems they tried to mimic beef a little too closely, but the flavor is excellent.

Love the chick'n cut up on salad.