This summer I dropped sixteen pounds. I think I owe part of it not just to cutting the crazy binging on sweets but also to replacing many pasta dishes with one of my most favorite stand-ins, Zucchini rawsta (and ok, yeah...running every day for 30-40 minutes surely played a large part!). Seriously, I ate TONS of it, still do! Never gets old to me. I've enjoyed it with pesto, tofu alfredo, as a bed on which to top lentils, and other simple dishes. Tonight, however, I enjoyed it simply with a quick tomato sauce.

For a while, I was using a vegetable peeler, and wasting a LOT of zuke since I wasn't peeling the innermost part of the veggie that houses the tiny seeds. Then I braved my garage (black widows, anyone?!) and dug out of the countless bins we've stored there since moving to this house one of my most favorite kitchen tools, the Saladacco Spiral Slicer! 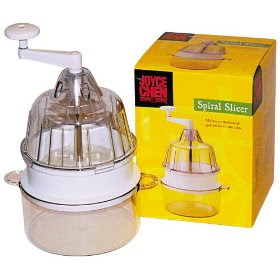 Love this thing. I've only really ever used it for zucchini and carrots, so $24 bucks may seem steep to some, but I've honestly used it SO many times in the few years I've owned it (especially when I'm cooking for others, so fast!) that it seems justified. Plus it's fun and requires no electricity!

I've linked to Amazon for anyone who's interested, but laughed when I read reviews. People have less than great things to say about my beloved kitchen tool, but I'm still really happy with it. It's never given me any problems. I quickly slice the zukes (or whatever) so that I have long pieces that fit in the Saladacco, it locks just fine for me, spin out my veggie, and snack on the 1/4 inch disc that's always left over when it's done spiraling. When making for a large group, I just saved the multiple little discs of 'wasted' zucchini for a salad or snack the next day.

That said, feast your eyes on the benefits of owning that little number... 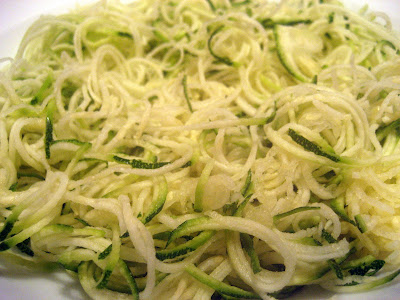 Topped with a little nutritional yeast (ok, a lot)... 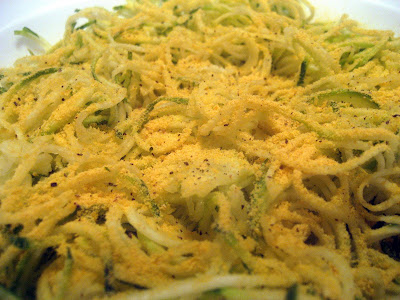 then some super easy homemade red sauce* and a generous sprinkling of hemp seed! 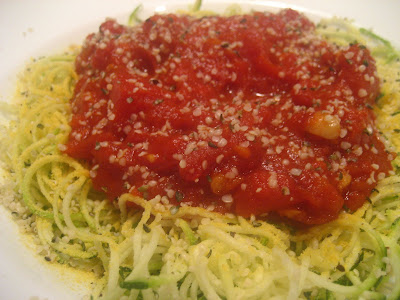 *I was going to link to an entry where I'd recounted my own version of easy red sauce, but I found that it doesn't exist. No real recipe, but I typically make it when I see tomatoes lying around that I fear will go bad if I'm not inspired to eat salads. It goes something like this...

Toss tomatoes in boiling water until skin puckers. Remove and slide skin off of the fruit. Chop. Heat olive oil in sauce pot and add a few minced cloves of garlic. When just browning, add tomatoes. Here I only had two medium tomatoes on hand so I added a can of no salt added tomatoes (didn't drain 'em) to my sauce pot. This made enough sauce for two people (or...me tonight...and me again tomorrow some time!). Add a bit of tomato paste to get the consistency you want (tho it will thicken up nicely as it simmers, the longer it simmers the tomato paste helps it from being so watery) and a pinch or two of sea salt, some onion powder, oregano, and a healthy pinch of sugar. If you have fresh basil, it's wonderful at the end. And obviously, you can add onion or any veggie you like at the beginning, but I prefer a quick, unadorned variety of tomato sauce. Allow to simmer for as long as possible. The longer the better. I threw this together in a flash at lunch time and it was perfect by dinner. So yeah, that's not a real recipe, but it's pretty forgiving and so fresh enjoyed over the zucchini.

Here's to hoping I figure out what to post for Vegan MoFo in the coming days. I have a wedding to officiate on Saturday for a family member and their rehearsal dinner being hosted at my house this Friday! Sadly, I'm just providing the place to have the shower and they'll be having a BBQ. I won't even be contributing any vegan fare for the event as I also have a beautiful friend's bridal shower to contribute to for Sunday. THAT I'll certainly blog about, but I'll be tempted to try and keep up with the toddler and all the events and Smart Dog it for the meals ahead but for your sake let's hope I don't!

This little gadget has been on my wish list for over a year. I tried to find one yesterday at bed bath and beyond since there just seems to be so many people who are in love with it! I really really want some zucchini pasta!!! Well I'm going to order mine today! Congrats on the weight loss!

I love the raw zucchini pasta and I have been wanting to buy that gadget for a while now.

i have one of those spiral slicers. it's awesome! you know what else it works well on? beets. love me some raw beet shreds.

I have GOT to get one of these. I have become irrationally obsessed with zucchini noodles - and I haven't even eaten them before!

Ok...I think I may need this little gadget. That zucchini is calling me...

It's only 18 bucks on Amazon. I definitely have to try this. Thanks!