I'm a big fan of tofu scramble, but some days? I just don't wanna wake up and start cooking first thing (this is rare for me as i usually wake up and wanna experiment in the kitchen, but it happens).

This is why I'm glad there's Amy's frozen entrees. Granted, very few are vegan, but the ones that are are really right up my alley. 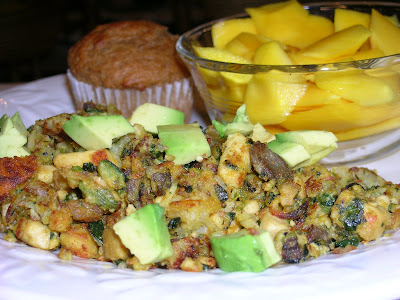 This one's the Tofu Scramble. I nuke it for four min, then stick it in a pan with some olive oil, add about 2T nutritional yeast, and stir occasionally as it gets nice and browned. I enjoyed this one with some diced avocado, a Banana Blueberry Muffin, and a sliced mango.

With the leftover pizza dough and basil tofu ricotta (I can't help but wanna call it 'riNOTta. hehe) from our Vday Anniversary dinner, I made a quick, very rectangular calzone for lunch. 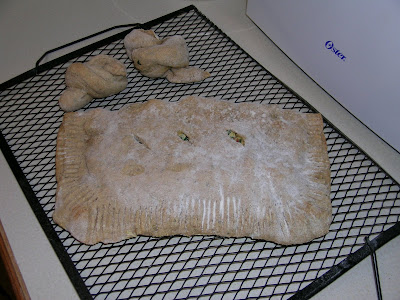 It contained some sauteed swiss chard with garlic and sundried tomatoes. I had enough dough for a couple knots on the side. This was great and lasted for days as it was about four servings. while it baked I broke out the Saladaccio and shredded some zucchini which I tossed with some of VWaV's sundried tomato/almond pesto. ( i used the jarred sundried tomatoes and just added water and left out the oil so this really is a quick easy version). 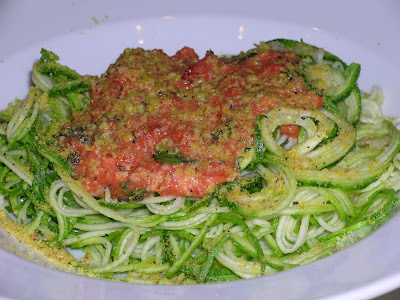 I wanted healthy for dinner with little effort and both my bags of organic spinach* were looking rather iffy. I don't do iffy veggies so I cooked up some lentils in some mushroom stock I had left over from the bisque and cooked up some quinoa.

While that was cooking I sauteed some garlic, onion, carrot, and leeks, with oregano, thyme, sea salt, and black pepper, then tossed in a cup of frozen corn while roasing some portabellos in the oven. Lastly came the garlic broccoli, which is always easy and fast to prepare and POOF! 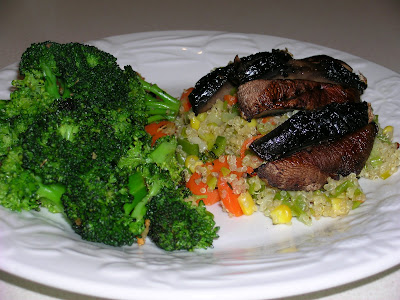 *Vivacious Vegan: remember your question about spinach? sorry i never got around to ansering it. Spinach contains oxalate which can inhibit the absorption of iron as it binds with it and removes it from the body. It binds with calcium as well. Oxalate is also a contributing factor to kidney stones, which I've had a history of. To get the most folate out of spinach, it is best to steam it, not eat it raw or boil it for too long. I made the comment I did as I love to eat spinach raw in salads but think that, that way, it's not nearly as nutritious as once believed. Still very good for you and full of vitamins A, C, E and antioxidants. hope that helps!

Lookin' good... I've never tried any of Amy's entrees, but that tofu scramble sure looks tasty. I love your quick meal at the end there. And what an interesting tidbit about spinach--I eat tons of it raw so maybe I should consider this a little more!

Everything looks great, those Amy Meals are great aren't they? I've had the tofu scrambe before, and it was pretty good. But they're way too pricey for me ($6 for the scramble. The one time I had it, it was on sale)

If those aer lazy meals, what do the industrious ones look like?!

All looks (and sounds) great. I have a saladaccio (it goes by another name here in Aus but I think it's the same thing) but I've never seen anyone make 'pasta' from it but then serve it with hot pasta saauce... I only use it with raw sauces (obviously). That's cool to see it getting other uses!

The most cooking that I do on weekday mornings is put a bit of bread in the toaster! So I think what you class as a lazy breakfast is pretty impressive! And it looks totally yummy by the way!
I had never heard of a saladacchio till right now, but now I want one! It makes your zucchini look really cool!

your food looks delicious! I'd like to try the rectangular calzone.

Wow! these meals look fantastic--especially the calzones. I'm so glad you mentioned the Saladacco, I've been considering buying one, but the product reviews on amazon.com are very extreme--some people love it and others think its a piece of junk. what do you think of yours? And does it make shoe-string, angel-hair type "noodles"?

laura- oh yes, that one is quite scrumptious. that and the korma one i've mentioned before are great stand by's for me when i don't have time to cook. they're pricey ($4 and change), but that just makes 'em special when i can grab one! ;)

orangie- wow, i think four and change is expensive, that stinks that where you are they're so high priced! loved the poem on your blog, by the way.

urban vegan- hehe, lazy to me is less about the actual cooking and more about how many dishes each thing will mess up. i hate doing dishes.

freedom- while i've done the same thing with a hot red sauce (tossed in the zuke for a min to make it hot as well) that one was all raw. the sd tomatoes were jarred and everything else was just whirred up in the processor with them. the dish was enjoyed cold. very fresh!

scottish vegan- oh, i dunno, after stopping by your blog yesterday, i'd say you were more than just a toast master. i can't WAIT to try the McPukkolla. thanks for sharing the recipe, i've never heard of it previously!

vicki- thanks! and i was embarrassed as i'm italian and spent years in a pizza joint...i'd never seen anyone pass anything like that for a calzone...but it sure was yummy! ;)

roxy- thank you. i LOVE that saladaccio..tho, sadly, i only ever use it for the zuke. it shreds either in loooong ribbons or you can flip up another set of teeth and it makes the shreds like you see in the picture. i can't imagine anyone not loving it. it's not electric, easy to use, easy to wash, very durable, and entirely too much fun. i swear zucchini just tastes better that thin and delicate!

Gosh, I just can't keep up with all the cookin' you're doing! I love your shredded zucchini dish and the portabellos & broccoli. And the muffins below look fabulous! I love to make a bunch and freeze them, then if you really really want one you have to wait for them to thaw.

Very interesting about the spinach. Thanks for sharing. I do eat a lot of raw spinach so this is something I'm going to look into more. Your calzone looks delish! I like the idea of a giant calzone. I recently made many individual ones but your method looks much easier.

I do love the Amy's meals. I think that over the past 15 years I have personally funded little miss Amy's college fund. The tofu scramble is awesome, but I've never sauteed it after microwaving; interesting idea!