**Oops! I had forgotten a couple key ingredients in the gravy recipe, but in making it just now I added what was missing. Hope you like it!

I didn't take a picture of it, sadly, but this gravy is a recipe I just couldn't NOT share...so enjoy a pic of our beloved eldest feline, Table....his life is pretty much gravy, hehe... 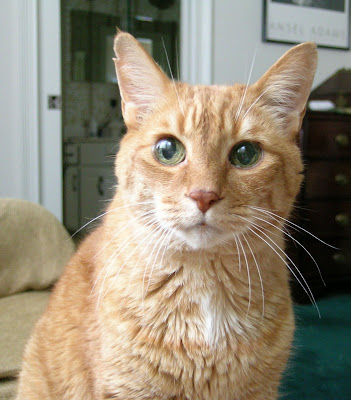 Last night, we grandkids decided to make dinner for my husband's grandmother and her sister. My sister-in-law armed herself with my millet loaf and mashed cauliflower and potatoes recipes and enlisted me in bringing the gravy and dessert. I was so excited that we were doing a fully vegan meal. There would also be some steamed broccoli but no meat, dairy, or eggs were to be included (not a typical family dinner, but grandma is uber accepting and loves trying out all things vegan. she totally rocks).

The real trick is that my sister (we usually skip the 'in-law' title) has horrible wheat allergies. It was only after making pot of the Nutritional Yeast Cookbook's Herbed Brown Gravy that I realized my tamari was not wheat free. Rats! What to do?

I was kind of at a loss as to how I would come up with something to not only suit her but wow her with flavor...no flour, and no soy or tamari sauce. Hmmmmmm. Then I just got to work and created a gravy, I'm proud to say, that not only was suitable for everyone, but better than any recipe driven gravy I'd concocted to date!

I didn't measure anything so measurements are approximate, but the great thing about making gravy is that it's forgiving and easy to tinker with.

Dissolve cornstarch in water and set aside.
Whisk miso with soy milk until dissolved. Add remaining ingredients (cornstarch mixture last) and, stirring constantly, bring to boil. Boil about 2-3 min while whisking, remove from heat and enjoy! So simple and so tasty, but best of all, vegan AND wheat-free! 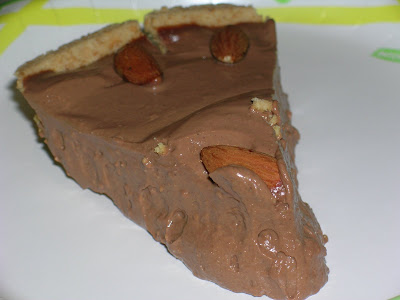 (told you I'd celebrate my birthday as much as humanly possible and then some! ;) 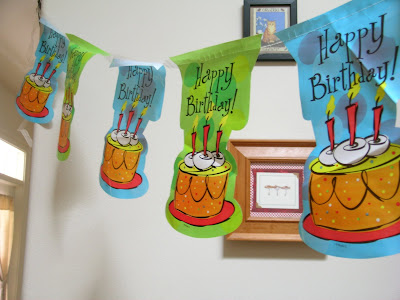 It was rich and wonderful and full of perfect creamy decadent flavor. She assured me that I wouldn't need a recipe to duplicate it (hers consisted of silken tofu, peanut butter, cocoa powder, sugar, and some cinnamon) so when it was time to come up with something for grandma's dinner, wing it I did with amazing results... 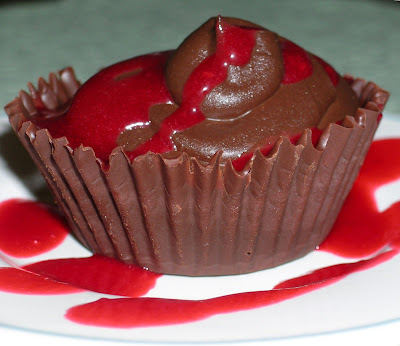 My version is darker, firmer, and richer than the original, making it an ideal mousse but still a superb pie filling if that's your fancy. I was thinking 'wheat-free' for my sis so i first melted some vegan chocolate and dropped it into paper cupcake liners, pulling it up the sides and quickly refrigerating to harden.

Then the mousse was made (shock of all shocks, i didn't measure, just dumped into a bowl the following:)

Blend until veeeery creamy and smooth. Upon tasting at this point my husband responded to my asking what it needed, "sugar?". first I thought he had totally lost it but i think he was answering in response to the mild bitterness that semi-sweet chocolate has. I love it but knew he'd know what grandma would prefer so I added a couple T of Florida Crytals and blended some more. He claims that did the trick but I still suspect that may have been all part of his sugar-lovin imagination.

for the raspberry sauce:
12 oz of frozen raspberries
push thru sieve to extract only the juice into small saucepan
add 1/4 c. Florida Crystals
heat over med-hi heat to boiling and add mixture of 1 tsp cornstarch to 1 T cold water.
simmer for a couple min and then cool.
I keep mine in an old agave nectar squeeze bottle in the 'fridge.

This made a ton of sauce and the mousse filled six regular sized cupcakes and about one more serving that we just stuck in the 'fridge for the next day. 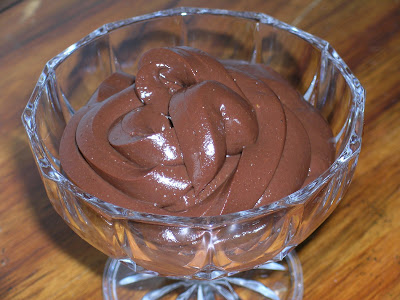 I do believe that the next time I make these I'll opt for mini muffin size as it's truly insanely rich and not at all healthy but wow! so good!
Posted by Don't Get Mad, Get Vegan! at 1:50 PM

Everything looks amazing! And thanks for the gravy recipe--I cannot wait to try it! I hope you had a wonderful night!

wow, too much goodness in one post!! haha. those desserts are the epitome of decadence.

Oh wow, excellent post! How great that your grandmother is so willing to try vegan food... and that you were able to come up with these two scrumptious recipes that even your sister could enjoy! Oh yes, and thanks for the recipe.

Everything looks fantastic. That is awesome that your grandma is happy to have vegan food and that you accommodated for the wheat allergy in a very creative way.

ohhh...it all looks so good. from the gravy to the dessert. and, even the kitty.

That mousse looks so decadent!

Wow, that sounds so decadent. I think your mini muffin size idea would be perfect. I have these mini muffin liners (and no mini muffin pan) that I've been trying to find a way to use. This would work out great. Do you think it would freeze well?